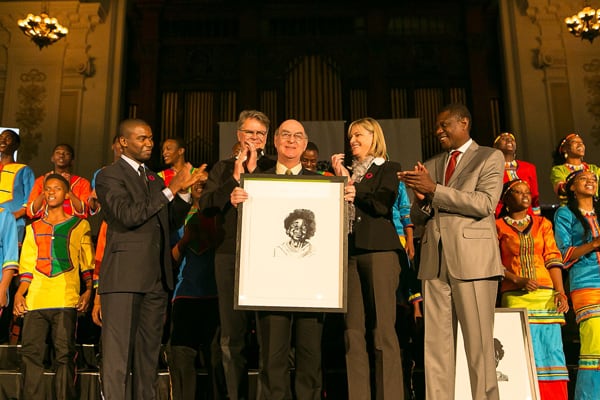 Jack Ginsberg is a passionate supporter of and advocate for South African art, who began collecting art and books about art and artists in his early twenties, and shares his passion and treasured collections broadly.

Over the past 45 years, Ginsberg has arguably built up the most formidable collection of artist books in Africa, and created an online archive of South African artists’ books (The Artists Book).

Ginsberg is a founding patron of The Ampersand Foundation, a non-profit charitable Trust which rewards excellence in the visual arts by granting Ampersand Fellowship Awards to young professional South African contemporary visual artists and arts administrators. These prestigious awards offer artists a funded two-month residency at the Ampersand apartment in New York, enabling them to visit New York’s museums and galleries, thereby benefiting their career development. The fund also supports local artists by buying their artwork and donating it to museums and galleries.

The Inyathelo Philanthropy Awards were established in 2007 by The South African Institute for Advancement to acknowledge, celebrate and profile those who have committed their personal resources towards broader social development in South Africa. Ginsberg received the 2014 Inyathelo Award for Philanthropy in the Arts, joining a list of over eighty philanthropists including the likes of Archbishop Emeritus Desmond Tutu.

Furthermore, in 2013, Ginsberg received the Art Champion Award at the 16th Annual Business Day BASA Awards, in recognition of his outstanding achievement in support for the arts.

Over and above his personal collections and being a founder of the Ampersand Foundation Residency Programme in New York, Ginsberg also helps fund the Artist Proof Studio – an innovative and engaged community printmaking centre in Newtown, Johannesburg. He has provided New York fellowships for four of their artists.

Importantly, Ginsburg is a board member and on-going art donor to the Wits Arts Museum (WAM). He assisted with funding and fundraising for the new WAM after it was forced to vacate its original premises, leaving the art works languishing in a dusty basement, and continues to support the museum by purchasing and donating works of art for their collection. Most notable is his extraordinary 25-year collection of more than 700 artworks, books and ephemera by esteemed South African artist Walter Battiss, which was shown at WAM for the first time in an exhibition, curated by Warren Siebrits, during 2016. While previous Battiss exhibitions were conceived thematically, Walter Battiss: “I invented myself” The Jack Ginsberg Collection at WAM was organised chronologically, giving viewers the opportunity to walk step by step through Battiss’ life and gain insight into aspects of his artistic production, including his extensive travels, interest in rock painting, calligraphy, exploration of multiple media and the Fook island of his imagination. The exhibition was accompanied by a 340-page illustrated book, as well as Battiss merchandise such as scarves, T-shirts, crockery, wrapping paper and postcards. A screen-print of Battiss’ Fook Script in a numbered edition of 100 was also sold for WAM fundraising. Not only did Ginsberg make his collection available to WAM for the exhibition, afterwards he also donated it to WAM’s permanent holdings to form the nucleus of a major Walter Battiss Archive, which is available to scholars by appointment for research.

Ginsberg is the epitome of a true art patron.